Celebrating the Web.. alla Romana - ItalianNotebook - Italy Travel Blog
Trending Now
Home Away from Home
Italy’s Flag
Breaking the Fast
Porky Best
Cookies all day!!
Buildings and Architecture
As Easy as Pie
Gelato is NOT Ice Cream
Beautiful Italian Landscapes for an Escape
This Is as Cheesy as It Gets
Events

Off I went this morning to see Tim Berners Lee speak at an IT conference/event currently underway in Rome called “Happy Birthday Web“. Twenty years ago, Tim developed something called the hypertext transfer protocol, in order to share documents with his fellow physicist researches.

Huh?! Who cares! What does that have to do with Italy….?!

Not so fast. The abbreviation of Tim’s protocol is http. Sound familiar? That little http is what makes the world-wide-web possible. Without http, no italiannotebook, no facebook, no google, no websites… no web. So it’s hat’s off to Tim, which is why I decided to attend.

Trouble is, while I did manage to hear him, I didn’t manage to see him all that well. A darn column was between us!

There was even a big LCD flatscreen to the side of the column, so that those of us seated on its other side could see a live webcast of Tim’s speech… absurd! I could have stayed at the office and watched the exact same live webcast from the comfort of my chair! Basically, I went to the event to NOT see Tim… bah.

Right. So what does all this have to do with Italy?

The column that prevented many of us from seeing Tim’s speech is part of the Temple of Hadrian (now a conference hall for the Chamber of Commerce), right in Rome’s historic center.

Innovation, tech, and the incredible changes in communication (and our lives) in just 20 years… held in an ancient Roman building… basically a speech I heard given by the “founder” of the web, but that I only saw (due to an almost 2000 year old column) thanks to a web broadcast, the very same technology he invented that he was talking about, that I could only hear, but not actually see, but kinda did, in a Roman Temple..

You get the picture. It was one of those lovely mind-bending infinite recursion moments, like you had for the first time as a kid sitting in a barber shop with floor-to-ceiling mirrors on opposite walls, endless images of yourself reflecting back and forth, simply agog at the enormity of it all. Except this one was alla Romana rather than bad-haircut flavored. 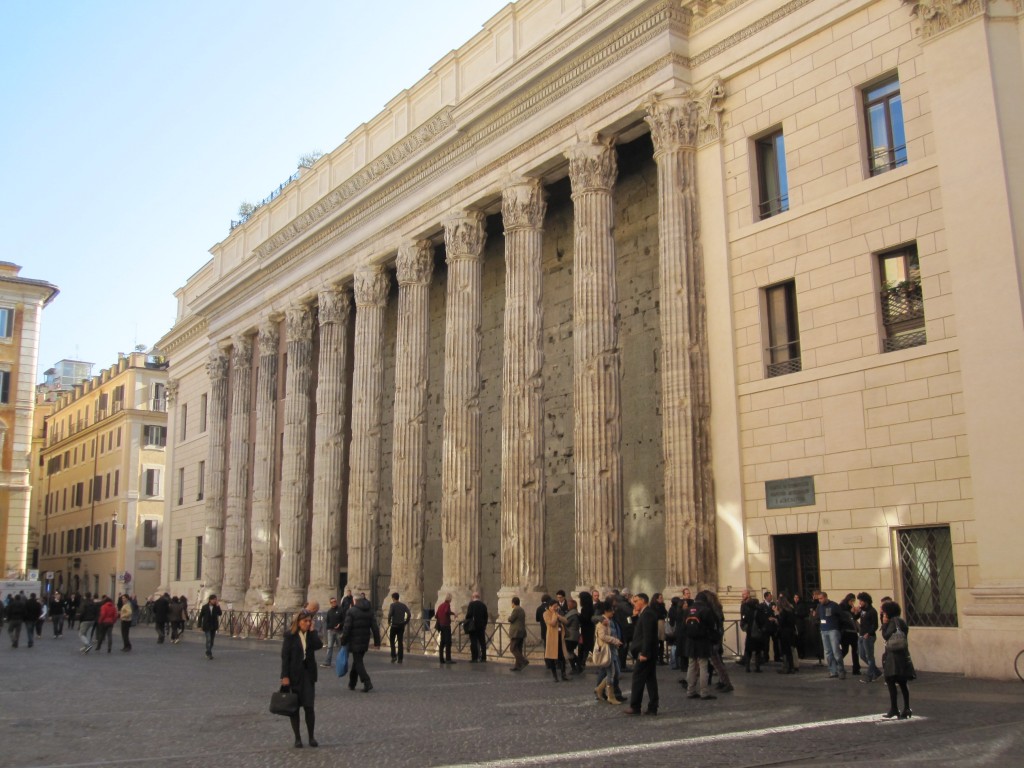 A View with a City