Rita’s Involtini Recipe - ItalianNotebook - Italy Travel Blog
Trending Now
Home Away from Home
Italy’s Flag
Breaking the Fast
Porky Best
Cookies all day!!
Buildings and Architecture
As Easy as Pie
Gelato is NOT Ice Cream
Beautiful Italian Landscapes for an Escape
This Is as Cheesy as It Gets
Food & Wine

As Rita’s says, this is a medium-poor Roman dish, not a truly poor Roman one. While the poorest Roman cuisine is based on the quinto-quarto (the fifth-quarter, meaning offal, of the cow), in this case the dish is already “richer”, at least back when beef was an expensive delicacy out of reach for many families.

The recipe for involtini (lit., little rolls) actually does use a tiny amount of quality beef, yet still manages to feed the entire family for a Sunday lunch.

How is that at all possible? Well, the Roman mamme are an ingenious lot, and so they came up with the trick of wrapping the thin slices of beef around a bread filling in order to makes the meal more consistent. This essentially stretches out the mileage of the expensive beef by filling everyone’s belly with a very flavorful meal.

Like so many Roman as well as other Italian recipes, while they might be a part of the cucina povera, they are no less delicious than richer dishes. Give these involtini a try and using the comment section below, let Rita know how it goes!

1. Blend some bread in a dry blender. move to a mixing bowl.
2. Now blend a carrot and an onion as well, adding some olive oil.
3. Mix 1. and 2. together with some ground Parmigiano.
4. Make “dumplings” with the above by using a clasped hand (see the video below!)
5. Now, lay a thin slice of beef on the palm of your hand, place a stuffing “dumpling” on the beef near your wrist, fold the edge of the beef over the stuffing, and roll with your other hand.
6. Close each involtino with a bamboo skewer, that you’ll drive through the involtino three times. Once at one end, once through the middle, and once through the other tip. Stretch the involtino out along the skewer.
(Rita gives a demonstration how to do all these tricks in the video below!)

7. Place all the involtini at the bottom of a pot. (A high sided pot is better so that the tomato doesn’t get all over your stove as it cooks.)
8. Add the chopped (or canned) tomatoes, as well as a whole carrot, a stalk of celery, and a whole onion, and another bit of olive oil. Once it reaches a hearty boil, lower the flame to the minimum, and cover the pot almost completely by layering a wooden spoon under the lid.
9. After 1.5 to 2 hours of this very slow cooking, remove the carrot, celery, and onion, and turn off the flame. Salt to taste, and serve. 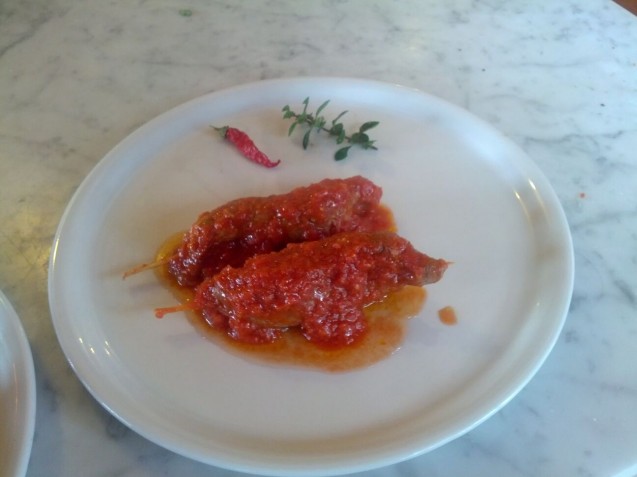