Fufluna’s Perch - ItalianNotebook - Italy Travel Blog
Trending Now
Home Away from Home
Italy’s Flag
Breaking the Fast
Porky Best
Cookies all day!!
Buildings and Architecture
As Easy as Pie
Gelato is NOT Ice Cream
Beautiful Italian Landscapes for an Escape
This Is as Cheesy as It Gets
Art & Archaeology

Not much left after being taken over (and built up) by the Romans, after falling into disrepair around the fall of the empire, and after being used as a quarry for the nearby Rocca in the Middle Ages. Yet Populonia was once the only Etruscan city on the sea, and was therefore extremely wealthy due to general Mediterranean trade and even more so due to its primacy as a mining area and pre-Roman industrial center for metallurgy.

While the iron ore arrived from Elba and was processed and then smelted in Baratti Bay at the foot of the hill, it was at the Acropolis where the official political and religious life took place.

Who knows what it looked like at its height around 500 BC… what remains today (the parts uncovered so far, that is) is a main road with the foundations of three main temples, one certainly dedicated to Fufluns or Fufluna (the pre-Roman, Etruscan version of Dionysus/Bacchus) who the residents venerated and from whom they get their city-state’s name.

There are also remains of a Roman loggia, a bath complex, cisterns, and other official or wealthy residential buildings.

Still, it is fascinating to look inland across the Bay, and then to walk the path along the top of Populonia’s defensive walls (peer through the vegetation on the downhill side to notice the drop!) with its incredible views of Elba, Capraia, and beyond… everything as far as your eyes can see, both inland and out to sea, was all once the “sphere of influence” of Fufluna.

While there might not be much left of the acropolis itself, there’s no doubt that they sure knew how to pick a spot.

(All images courtesy of Glen Bowman… many thanks! Creative Commons license CC BY-SA 2.0) 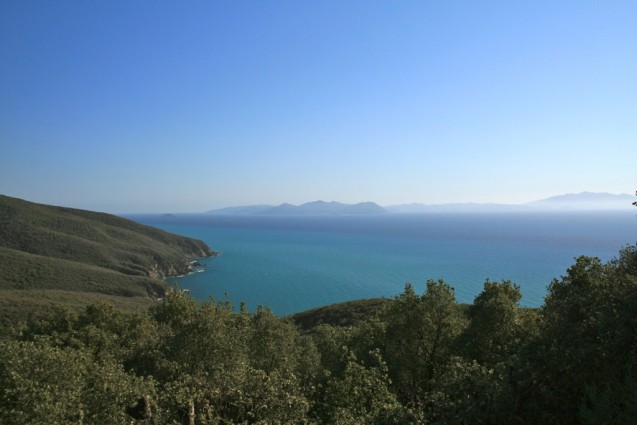 Tobacco, Gift From the New World