Tobacco, Gift From the New World - ItalianNotebook - Italy Travel Blog
Trending Now
Home Away from Home
Italy’s Flag
Breaking the Fast
Porky Best
Cookies all day!!
Buildings and Architecture
As Easy as Pie
Gelato is NOT Ice Cream
Beautiful Italian Landscapes for an Escape
This Is as Cheesy as It Gets
Local Interest

Tobacco, Gift From the New World 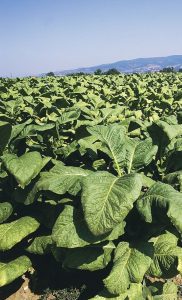 Three of the main crops in Umbria are olives, wine grapes and tobacco, which also rotate with wheat and sunflowers. Each year it’s a toss up as to which of these crops will be in the field below Piegaro and across the river. Luca Sargentini, from a family that has farmed organically for many generations, says that their tobacco goes into making the finest cigars.

Tobacco and sunflowers are perhaps the most beautiful of crops. Girasole (turn+sun) fill the fields with their happy yellow faces from July through August, while the pink flowers of the tobacco plants perfume the fields in September.

Each year you can follow this crop from the first small plants poking up through carefully tilled soil until they are taller than those who will harvest them in mid-September. Working for weeks, the bevy of braccianti agricoli, also tabacchine (seasonal tobacco workers), make two passes to cut the leaves. Men and women dwarfed by tall plants cut the leaves, and runners carry them to the telaini (racks) designed to impale the leaves on pali (poles). Then they are hung for the essiccazione (drying out) in the seccatoi (curing rooms) with heating kilns.

The weathered face of Elsa, who Luca calls “The Mother of Us All”, tells the story of many September suns. She is just as vigorous today at the age of seventy-two as the day of her first harvest when she was barely a teen.

Anyway you cut it, tobacco is a thriving crop in Umbria, a gift from the New World. 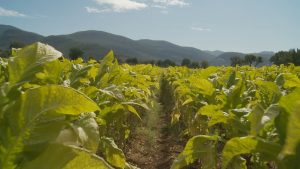