Drain Away - ItalianNotebook - Italy Travel Blog
Trending Now
Home Away from Home
Italy’s Flag
Breaking the Fast
Porky Best
Cookies all day!!
Buildings and Architecture
As Easy as Pie
Gelato is NOT Ice Cream
Beautiful Italian Landscapes for an Escape
This Is as Cheesy as It Gets
Art & Archaeology

Puozza scula’… possibly, at the same time, one of the most colorful and most disturbing Neapolitan insults that one can wish upon another person. It literally means, “May you drain away.”

The saying derives from the macabre burial practices of the seventeenth century Dominicans who painted brightly colored frescoes beside the crypts of wealthy patrons – and used their skulls for decoration.

A tour of the San Gaudioso catacombs, located beneath the modern Basilica of Santa Maria della Sanita’, takes the visitor past these crypts and into rooms lined with tufo stone niches. Poorer people were laid to rest here in a fetal position, believed to help bring them back to the Father. The monks also punctured holes into the stomach of the deceased so the acids from the body ran down (or drained away) to the bottom of the niche, helping the corpse decompose more quickly. In this way, the same niche could be used for many family members. 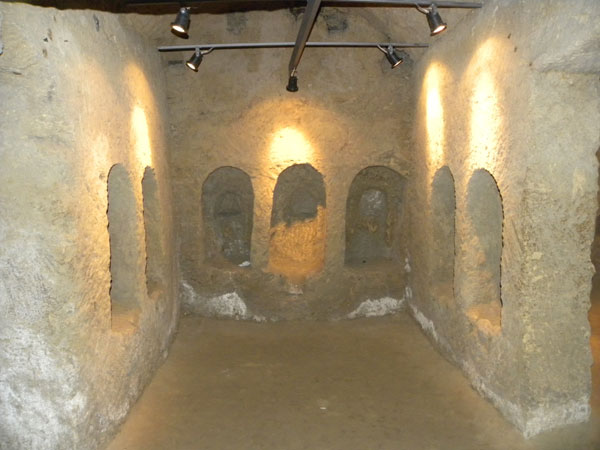