In Foligno, “a Galileo Universe” - ItalianNotebook - Italy Travel Blog
Trending Now
Home Away from Home
Italy’s Flag
Breaking the Fast
Porky Best
Cookies all day!!
Buildings and Architecture
As Easy as Pie
Gelato is NOT Ice Cream
Beautiful Italian Landscapes for an Escape
This Is as Cheesy as It Gets
Events

Where else can you join a Saturday night rapt crowd ranging from teens to the elderly in a 14th-century frescoed monastic church – now an auditorium – to hear a physicist and linguist in spirited colloquy on Il dialogo fra un umanista e uno scienziato? In Foligno at the fifth edition of the Festa di Scienza e Filosofia! The Saturday night dialogue between a scientist (a physicist, specialist in subnuclear particles) and humanist (a professor of linguistics) was one of seventy-eight conferences presented in the 17th-century town hall, Baroque family palaces, the local theater, a 14th-century convent, and Foligno’s frescoed medieval splendor, Palazzo Trinci, in this four-day April festival.

Paolo Mieli, noted Italian journalist and editor put it this way before his talk on history as the formative base of the future. “I’m overcome, overwhelmed by this festa, truly an honor for Italy. Without these initiatives, we return to barbarianism. You’ve chosen this festival rather than Saturday night parties. Do not stop coming. Compliments to the festival organizers. Compliments to each of you.”

The festival “started almost as a game,“ Maurizio Renzini told me with a grin as we talked just before the talk “Neurotechnology and Human Enhancement” presented by Paolo Benanti, Franciscan friar and former bioethics theology professor at Georgetown. One of the founders (in 2011) of Foligno’s Laboratorio delle Scienze Sperimentali, Renzini added that the first festival had opened with just twenty-six conferences and attendance at the 2015 festival had leapt to 25,000 (5,000 more than last year). For four days, Foligno’s piazzas, coffee bars and restaurants were filled until late at night with physicists, biologists, neuroscientists, historians and philosophers joining festival attendees in animated conversation.

Two hundred high schoolers offered assistance at all conferences, answering visitors questions, keeping festival statistics, selling books written by festival lecturers and filming and videoing the conferences. The festival draws in small children, too: conferences for the little ones included everything from origami workshops to maze walks to the building of robots. Children from five to eleven could sign up for philosophy laboratories and festival theatrical presentations introduce the little ones to Galileo, to Dante. All students in all of the Foligno schools participated in some way in the festival, either participating in conferences (older students) or in science and/or philosophy laboratories (younger ones). After the talk “La Rivoluzione Spaziale” by Roberto Battiston, head of Italy’s space program, a young sixth-grade fan presented him a drawing of his conception of the universe, a pre-talk assignment of his teacher.

And as this is a festival in Italy, the food element could not be missing. During la Festa di Scienza e Filosofia, twelve Foligno restaurants offer menus on two themes: “Science in the kitchen, innovation and tradition” and “Science in action: Nature and biodiversity.” At the trattoria La Zucca, the young chef presented lamb cooked both in the traditional way of Umbria’s shepherds and in a nouvelle cuisine mode. At another restaurant, the festival menu taped to the door bore the heading “Festival menu, scientifically tested.” At the restaurant of Hotel Italia, I talked to elderly owner/cook Lella as she prepared desserts in the restaurant kitchen, her granddaughter at her side. Lella’s festival menu would include ravioli stuffed with a citrus fruit medley and a pasta filled with spring artichokes and veal followed by a main course of codfish and potatoes on a bed of chickpea cream. She dubbed her menu “the language of Galileo’s universe.”

Perfetto: after all for four days, Foligno would become a “Galileo universe.” 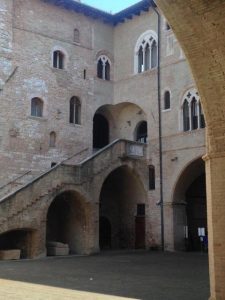 More than a Snack, this “Ciancino”