The Grotto Sanctuary of Monte Stella - ItalianNotebook - Italy Travel Blog
Trending Now
Home Away from Home
Italy’s Flag
Breaking the Fast
Porky Best
Cookies all day!!
Buildings and Architecture
As Easy as Pie
Gelato is NOT Ice Cream
Beautiful Italian Landscapes for an Escape
This Is as Cheesy as It Gets
Places

This small village situated between Mount Stella and Mount Consolino overlooking the Stilaro Valley, was founded by miners who worked in the iron rich mines of the valley and was once the most important mining centre in all of Southern Italy. The 18th century Fontana dei Minatori (Fountain of the Miners), which was used by the miners to quench their thirst after a long day in the mines, is the symbol of Pazzano.

From the fountain, an ancient mountain trail leads you through the beautiful countryside to the Sanctuary of Monte Stella located in a grotto. As you descend the stairway of about sixty steps carved into stone, you will be left awestruck. 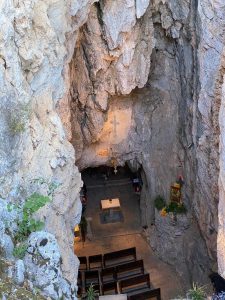 Within this small refuge once used by monks to contemplate and pray, there are two medieval frescoes, a marble sculpture of the Virgin Mary created in 1562 and a 17th century marble altar.

Quite remarkable, like so much in Calabria, isn’t it?