Sardella . . Calabrian Caviar - ItalianNotebook - Italy Travel Blog
Trending Now
Home Away from Home
Italy’s Flag
Breaking the Fast
Porky Best
Cookies all day!!
Buildings and Architecture
As Easy as Pie
Gelato is NOT Ice Cream
Beautiful Italian Landscapes for an Escape
This Is as Cheesy as It Gets
Food & Wine

Calabria – This year’s Sardella season begins in a few weeks! And to think that, as a Calabrian off-shoot of the ancient 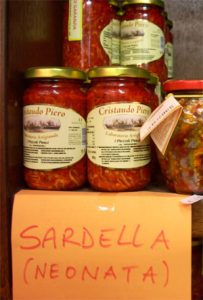 Roman salted fish sauce staple called Garum, sardella is a culinary tradition that Calabrians have been repeating every year since antiquity. Of course, trust them to take any food and add large quantities of peperoncino (spicy red pepper) to make it even tastier. And thankful we all are to them for it!

Sardella is a mouth watering delicacy that is made from newly hatched sardines (Feb-Apr), salt, peperoncino, and wild fennel tips. The miniscule fish are washed in fresh water, drained in baskets, and then layered in terracotta jars with salt and the red pepper. After two days, it is all mixed together by hand (red stained hands anyone? Do not scratch your eyes during the next 24 hours!) and then placed in jars to cure for six to seven months.

Usually eaten as a spread on bread, it is also used in many local dishes, particularly pasta. Just add a bit of warm water from the pasta to a heaping spoonful of sardella in a glass to “melt” it or “loosen” it up, and then add to the pasta. No surprise they call il caviale della Calabria, Calabrian caviar! Expensive, but well worth every cent. A source is www.deliziedicalabria.it.