Bustling Catania Fish Market - ItalianNotebook - Italy Travel Blog
Trending Now
Home Away from Home
Italy’s Flag
Breaking the Fast
Porky Best
Cookies all day!!
Buildings and Architecture
As Easy as Pie
Gelato is NOT Ice Cream
Beautiful Italian Landscapes for an Escape
This Is as Cheesy as It Gets
Places

Located at the tip of Italy’s ‘boot’ and surrounded by the Mediterranean and Ionian Seas, Catania is a wide-spread city at the base of active Mount Etna. The city is filled with ancient Greek and Roman ruins, churches, piazzas, a huge port, and markets. The fish market is a must-see, as you can really get a feel for Sicilian life.

From the duomo di Catania, the Cattedrale di Sant’Agata, with its incredible bluish-grey baroque architecture (and the Fontana dell’Elefante in the center of the piazza), head down the south-west corner of the piazza to the bustling fish market.

It’s lively, boisterous, colorful, smelly, and gritty with an electric atmosphere. This is one of the biggest fish markets in Italy, and only the freshest of fish and seafood is found here. And what a selection! Octopus, squid, clams, mussels, eels, sardines, swordfish, anchovies, tuna, and other varieties of fish. You name it, they have it.

Fish and seafood are displayed on make-shift tables using buckets, plastic bins, and cutting boards that have been stained with blood over the years. Knives and cleavers are used to cut and trim, which look too dangerous to handle, except in the hands of the seasoned fishmongers.

Stand in one spot and watch the spectacle. Locals window-shop as they walk along the carts, stands, and buckets filled with things splashing around in the water, while fishmongers yell out, “Ho il pesce freschissimo!” (I have the freshest fish!), “Ho i prezzi migliori!” (I have the best prices!), all the while gesturing with their hands in animation in order to attract potential buyers. I imagine many have their favorite fishmonger.

Walk carefully, as it’s a wet, messy scene with buckets of fish on the ground, debris and fish parts spewed all over the area. I watched one man clean squid, all by hand, tossing the inedible parts into a bucket, sometimes missing it and landing on the ground. Best not to wear open-toed shoes here! At the end of the day, the entire area is cleaned up and ready for the next day’s market.

In the same area on the upper level are lots of other food stalls selling cheese, raw and cured meats, vegetables, including a full spread of various antipasti; even foods prepared to be simply placed in an oven to bake. I saw a restaurant chef shopping, gathering the freshest ingredients for his menu. Where else would anyone shop?

If you are lucky to enough to spend time in Catania in a rental apartment, do your daily shopping here and be sure to haggle with the fishmongers, but do take the time to enjoy the spectacle of this bustling fish market. 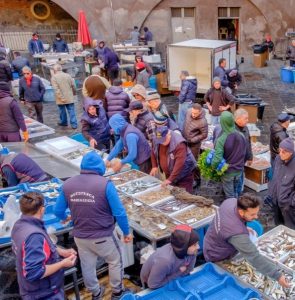