Vespasian’s Legacy - ItalianNotebook - Italy Travel Blog
Trending Now
Home Away from Home
Italy’s Flag
Breaking the Fast
Porky Best
Cookies all day!!
Buildings and Architecture
As Easy as Pie
Gelato is NOT Ice Cream
Beautiful Italian Landscapes for an Escape
This Is as Cheesy as It Gets
Art & Archaeology

Not a lot is known about the Emperor Vespasian’s life and brief rule, except that he was a highly competent general who built the gigantic Flavian Amphitheatre, better known as the Roman Colosseum.

His famous aphorism “Pecunia non olet” (Money does not smell) refers to the terse response he gave to his son Titus, who was complaining about the unpleasant nature of the Urine Tax his father had imposed on the product of the city’s urinals. (The first public toilets ever, by the way, were introduced by Vespasian in 74 A.D).

Up until then, Romans had simply urinated into pots that were emptied into cesspools.  With the introduction of public urinals, the liquid waste could be collected and sold as a source of ammonia, which was used for tanning leather and by launderers to clean the patricians’ white woolen togas.

Today the Latin phrase is used to mean that the value of money is not tainted by its origins and even though public urinals have become a rarity, to this day they are still known in Italy as Vespasiani (Vespasians).

The following are photos of an old-fashioned Vespasiano, or public urinal, still in use in the tiny town Morcone, province of Benevento. 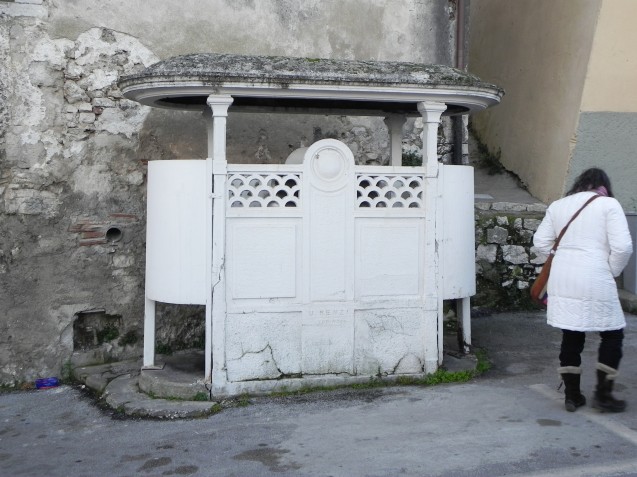