Todi, a Jewel in Umbria - ItalianNotebook - Italy Travel Blog
Trending Now
Home Away from Home
Italy’s Flag
Breaking the Fast
Porky Best
Cookies all day!!
Buildings and Architecture
As Easy as Pie
Gelato is NOT Ice Cream
Beautiful Italian Landscapes for an Escape
This Is as Cheesy as It Gets
Places

Todi, a Jewel in Umbria

In reverse chronological order Garibaldi and the Red Shirts, the Goths, Romans, the Etruscans, and originally the Umbri were just some of the people that constitute Todi’s rich history. And before any of these, even Hercules is said to have passed through. Regardless of who and when, this jewel of a medieval town in the heart of Italy takes its rightful place along side other beautiful neighboring towns such as Spoleto, Assisi, and Perugia.

Drive up the hill and park at any point along the circumference of the outer walls, built in the 13th century. Enter through the closest porta (door, or gate), and begin walking up along any one of the main roads, medieval homes and buildings packed into every inch of space. Notice the smaller side roads (alleys?) that drop of to either side… worth losing some altitude for, as at their ends you’ll find one of Todi’s many porte, breathtaking views of the lush Umbrian countryside spilling out 600 feet below.

Don’t worry about knowing where you are, just keep walking uphill until there’s no more “up” to go. At that point you’ll have reached one of the most amazing medieval squares in central Italy… come on Sunday (the second Sunday of each month, but call, it can change) and you’ll catch a small antique market. Get here on a damp and foggy fall morning when few others are in the square, and you wouldn’t bat an eyelid were someone to emerge from an alley in full Renaissance garb. 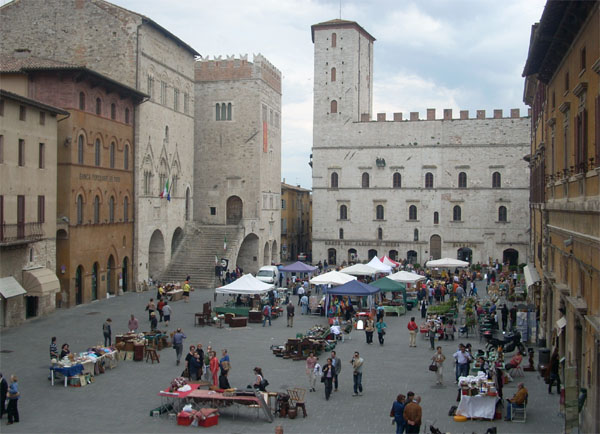