Fare le Cose al Volo… - ItalianNotebook - Italy Travel Blog
Trending Now
Home Away from Home
Italy’s Flag
Breaking the Fast
Porky Best
Cookies all day!!
Buildings and Architecture
As Easy as Pie
Gelato is NOT Ice Cream
Beautiful Italian Landscapes for an Escape
This Is as Cheesy as It Gets
Art & Archaeology

Italy is certainly known for fare le cose con calma (doing things slowly) as they say. Fare le cose al volo however, (literally, doing things on the fly) is just as much a part of the culture.

For example, prendere un caffe’… We’ve already mentioned sitting and watching the world go by vs. standing and drinking it in two seconds flat. The former is for the weekend, while the latter is the norm on any workday. Just as important, mind you… but al volo.

And how about Italian “fast-food”? Supplí, arancini, panelle, pizza al taglio… No less delicious than the “slower” weekend or evening meals fortunately, but pretty much the rule for lunch during the week… al volo as one says.

Now, while it is certainly a stretch to put Madonnelle (the lovely small images of Madonnas ubiquitous throughout the streets of any Italian city) in the same category, might it make sense to think of them in the same way?

Notice how people will briefly slow down to cross themselves while rushing by on foot, or will stop for a minute or two praying sottovoce to their favorite madonnella between errands. With all due affection and respect, you can think of them as less formal, more intimate, ways to ask for intercession and to pray. While no less important than the more austere churches, attended for longer on weekends, maybe here in faith’s case too, you might say that it’s a case of doing things… al volo? 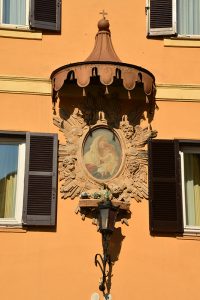 The Hillside Villas of Lucca